While a lot of focus from players are on the main deck type and strategy - the importance of the sideboard should not be underestimated and also be addressed through a chosen strategy.

Two key questions for a player regardless of the deck type being played are:

A) How to structure the sideboard?

B) What to sideboard in and out?

The importance of the sideboard is often underestimated by players and sometimes also the “last part of the package” being put into place without spending to much time on considering the strategic implications for the deck being played.

To illustrate the potential impact of a sideboard, consider the following two aspects:

15 cards do not seem to be a lot in order to impose a significant impact on a given 60 card deck build.  However, from the case study done by Frank Karsten published in the article “How Many Lands Do You Need to Consistently Hit Your Land Drops?” from May 2017, it can be deducted that across the different deck archetypes the lands/mana sources typically are:

Assuming that side boarding is done on a 1:1 card ratio (see later in article) and that mana base is not impacted, you can perceive the lands and mana sources as a typically fixed base in the main deck.

The implication of this is that a:

15-card sideboard in reality can impact and/or transform
40% of an Aggro deck build,
43% of a Midrange deck build and
45% of a Control deck build.

So, for Control decks and other mana intensive decks the sideboard typically can alter close to half of the deck build.

Sideboard influence of a match

A sometimes-overlooked aspect is that a match often will consist of three games in total. Based on the Danish Tron Wars online tournament from March, April and May 2020 – 43% of the played matches resulted in three games in order to find a winner. In more competitive tournaments with even more experienced/professional players this number would likely increase as there will not be “easy win” matches due to significant differences in skill level and significantly less misplays.

In a MTG match, only the first game is with the fixed main deck – the two other games will be with impact from post side-boarding of both players in the match.  Essentially in a 3-game match – 2/3 of the match will be affected by sideboards.

This is also the key argument for when a new deck build is tested:

A. How to Structure the sideboard?

It can be quite difficult to identify and select the perfect 15 cards for a sideboard. One way to start the process is to employ the “elephant method”. Legendary deck builder and Pro Tour Hall of Famer Zvi Mowshowitz explains the elephant method as:

" Writing out ideal realistic lists for all matchups and then trying to make the unique cards in those lists add up to 75 cards. Then and first then deciding on the specific 60 for the main deck and the specific 15 for the sideboard."

When you employ the elephant method,
you're thinking of your deck as a complete 75-card unit.

You consider what you'd like your deck to look like after sideboarding in each of the deck type matchups you expect to face—you make sure you have the exact number of cards to bring in and take out for each deck type matchup—and you construct your deck and sideboard accordingly. In short, you look at the main deck and sideboard as one big picture, and your sideboard is as important to the big picture as your main deck is.

Steps in the Elephant method:

STEP 1:
Write out a number of realistic 60-card post-sideboard configurations that you’d like to have in all major deck type matchups.

STEP 2:
Then try to make the unique cards in those lists add up to 75

Then split the chosen 75 cards into a 60 starting main deck cards and 15 sideboard cards.

At the final step, you then split those 75 cards into 60 card main deck cards and 15 sideboard cards. This deck building approach comes with the benefit, that it ensures that the total 75-unit card build contains no more than 15 void or “dead cards” against all the evaluated matchups

Fixed sideboard plans are perhaps overrated, as you always have to make small adjustments depending on the specifics of a player’s opponent’s deck. But it is valuable to draw up these plans while in the process of building the sideboard, as it helps having the right number of cards for every matchup.

This is in order to maintain the main decks in-built balance – e.g between creatures and supporting cards, colors and mana sources as well as mana curve balance in general.

Maximizing match win percentage against the “meta” in a tournament is a much better strategy than optimizing towards making every matchup (or at least as many matchups as possible) favorable. This is explained in the  full article DECK TYPES AND STRATEGIES. You can find the full version in a downloadable pdf file to the left under the MENU TAB "MTG Articles". But the essence is that:

A Player should always build the sideboard with focus on where
the main deck can improve its weaknesses the most
against the expected overall metagame composition…
...rather than focusing on cards that tries to improve weaknesses
against specific deck type matchups.

In short, a transformative sideboard is when you bring in several sideboard cards to radically change your deck type, overall strategy and how it plays.  In relation to the Deck archetype strategies including the hybrid type decks – such a sideboard can play a particularly strong role.

Recalling the general strategic advantage and disadvantage based on the nature of the deck types, a sideboard that can transform a main deck from e.g. Midrange -> Aggro or Aggro -> Tempo can support gaining advantage over e.g a Control deck: 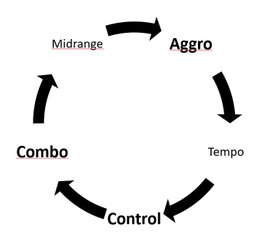 Other more specific advantages of a transformative sideboard:

Despite the advantages of a Transformative sideboard, there are disadvantages as well:

With normally at least 10 cards dedicated to the transformation – a player does not have as nearly as many options and side boarding flexibility.  As such the sideboarding strategy for a player will often be a bit binary: "Do the player bring in the full package or not?"
Additionally in tournaments with “Swiss” rounds or group play before final rounds, rumors about a player’s transformative deck can be shared in advance of a game. Also, in tournaments where deck pictures of the top decks for the final rounds are revealed in advance, the strategic advantage will also decline significantly.

Combo decks traditionally have good game one matchups. But once the answers and hate cards come in, life for a Combo Deck becomes a much harder. Here a Player can sidestep that entirely with a transformational sideboard. Additionally, the loss of “free” sideboard spots hurts combo decks less than other decks. Quite often, a player cannot effectively sideboard more than a few cards before it dilutes the combo strategy, so having a large chunk of cards that can swap straight in and out often can work out fine.

Another great time to have a transformative sideboard is when a deck is heavily favored against most decks in the metagame but has one or two bad matchups that transforming will fix. If that is what is needed close the competitive gap, a transformational sideboard can be the answer.

In general, for most deck types and builds - most of the time a transformative sideboard is not the best choice. But for specific deck builds and if applied timely the effect can be massive – often resulting in some quick wins.

B. What to Sideboard in or out?

As both players are normally using the possibility to do side boarding after the first game, it is important to remember following:

Generally, you can divide the cards in your sideboard into three types – that can be considered brought into your main deck from your sideboard:

Do not over sideboard

If it seems that your main deck already has a significant advantage over the opponent’s deck based on the first match – be cautious not to change to much. In addition, you should not sideboard in additional cards that do the same as the key cards that gives the advantage.  Just adding more of the same will not yield the same incremental value as including answers/threats to opponent’s expected sideboarding.

It can be tough to figure out which cards to board in and out for various matchups. Certain hate cards, such as Karma, Gloom, Shatterstorm, City in a Bottle etc. have obvious uses and does not require a lot of consideration, but other cards can require more evaluation.

If in doubt following strategic advice can be helpful:

The reason for this, is that a player will usually face more interactive cards and efficient answers from the opponent after side boarding. Opponent will usually have brought in removal spells to target the players main strategy or key cards in the played deck type. As a result, after sideboard a player is often better off with cards that can stand on their own or that generate resource advantage and cutting cards that fully relies on other cards to function, cards whose main task is to enable other cards, and cards that are easily answered by opposing sideboard cards.

This is also why Combo archetype decks can benefit from a sideboard that can transform the deck type - taking out the Combo element and adding in stand-alone cards to pursue a completely different strategy.

In practice it always depends on the specifics of the deck matchup, and a player should always try to keep the core balance of the deck and the mana curve intact.

Adjust side boarding depending being on play/ on draw

The nature of a matchup also depends on who is on the play and who is on the draw. This has impact on what should be side boarded in or out. This is even more pronounced in mirror matches with same deck types.

When you are on the draw, you are behind in the tempo and damage race from the start. But you do have an extra card to work with. As a result, you can often safely cut a land and remove a few cheap threats.

Meanwhile, you should add efficient answers and cards that helps you to catch-up and allow you to steal back tempo. Midrange decks with higher-toughness creatures are normally better in catching up in a beatdown game than for example a pure Aggro deck.
In a mirror match between two Aggro decks. The Aggro deck on the draw could try to sideboard in cards that moves the deck a bit more towards a Tempo (Aggro-Control) deck or that can normally succeed with unfair trade-offs (e.g Swords to Plowshares, Lightning Bolt etc.)

When you’re on the play, you can often safely add a land if you have one in your sideboard, but more importantly, you are in a prime position to capitalize on opposing stumbles. If your opponent draws several lands, artifact mana resources or slow cards, a faster mana curve with additional threats can sometimes steal a win. After all, you get to deploy your cards a turn ahead of them. But at the same time, you’re down a card, which means a strategy filled with 1-for-1 answers and reactive cards won’t be as effective. Instead, the focus for cards to sideboard in should be on additional threats and aggressive cards.

In a mirror match between two Control decks. The Control deck on the draw could try to sideboard in cards that moves the deck a bit more towards a Midrange (Control-Aggro) deck that can play additional threats - even more ideally earlier in the game (e.g Mishra’s factory, Hypnotic Specter, Su-Chi, etc.)