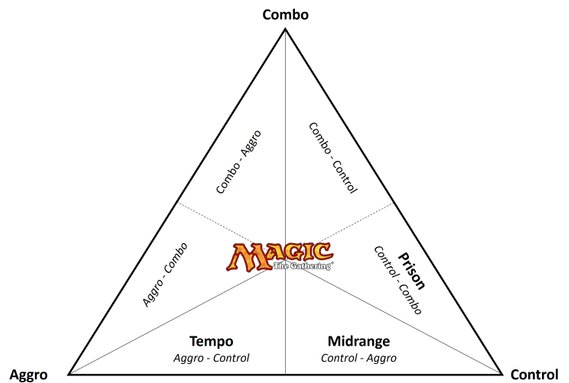 No matter what deck strategy you want to pursue, what cards you want to play or how you are building your deck - there are primarily three aspects you can make your Magic game about:

No matter what aspect you are building toward, it is likely one of these three aspects that will be the focus in your deck. These three aspects are also characterizing the three classic deck archetypes in Old school Magic.

The three archetype decks are:
“Aggro” – fast threats and dealing continuous damage
“Control” – wearing down or weakening opponent while building resource advantage
“Combo” – Combine cards into a powerful effect/state that wins the game

"AGGRO” DECK ARCHETYPE
(Make the game all about dealing damage)

The defining characteristic of ”Aggro” decks is, that the strategic approach it primarily focuses on - is fighting the opponent’s life total.

“CONTROL” DECK ARCHETYPE
(Make the game about attrition and resources)

COMBO” DECK ARCHETYPE
(Make the game about “something else”)

"Combo" decks are defined by using the interaction of two or more cards (a "combination") to create a powerful effect that either wins the game immediately or creates a situation that subsequently leads to a win. Many combo decks are not strictly limited to a two-card combo. Rather, combo decks tend to be synergy decks designed to exploit certain cards or resources.

"Tempo" is another name for the ”Aggro-Control” hybrid.

It aims to cast quick threats with the intent to overwhelm before the opponent can develop an advantageous board state. The ”Control” elements are often found in the form of burn (direct damage) or removal spells, as they not only wipe the board of opposing blockers, but can be dually used to close out the game.

"Midrange" is another name for the ”Control-Aggro” hybrid.

A typical “Midrange” deck has an early game plan of mana ramp and control, but begins to play threats once it reaches four to six mana. A “Midrange” deck will often seek to play a reactive, attrition-based game against ”Aggro” decks and a more proactive, tempo-based game against ”Control” decks. This is referred to as "going bigger" than ”Aggro” and "getting in under ”Control”.

"Prison" is another name for the ”Control-Combo” hybrid.

A Common type of ”Control”-“Combo” is "Prison decks” which has given name to this hybrid deck type that aims for full control through resource denial via a “Combo”. Concepts for this type of decks are often relatively simple but extremely powerful. This deck type is defined by oppressive cards that slow down the game and deny players of resources or prevent a player from advancing the game state.

Power profile for each Deck type

The below colorful graphs shows the three major deck archetypes: Combo, ”Aggro”, and ”Control” plus the two Hybrid decks "Tempo" and "Mid-range".

The X-axis represents time, which in Magic is measured by how many turns have passed.

The Y-axis represents a deck's Power Level – how strong it is or how equipped it is to be "winning the game" on that turn (comparatively speaking). 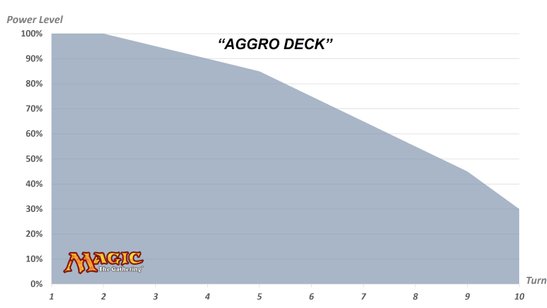 The increasingly downward power level shows decks chance to top-deck one of the many creature threats or a burn spell to win when the game lasts past turn five or so. 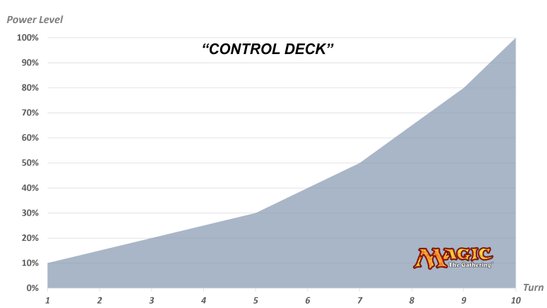 The ”Control” archetype begins very low in power level but gradually increases with each passing turn. After enough turns has passed (typically 6+), the deck has likely assembled enough resources and answers to contain all the opponent's threats to emerge victorious. The kill is inevitable even if the opponent still has not officially lost yet on turn ten. An example here is a blue-white deck that is holding more counter spells than the opponent has threats left in his deck and is cranking out 2/2 Assembly-Workers with Urza's Factory. 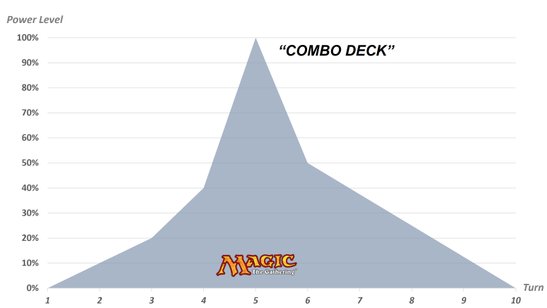 The "Combo" archetype begins weak and ends weak, but it has a gigantic one-turn spike of game-winning power that normally determines right then and there if it wins or loses. Exactly when the deck “combo-off” will vary from game to game depending on cards drawn. It can be in the first half of the game, last half. So, in average it will be around midgame as reflected in the illustration. 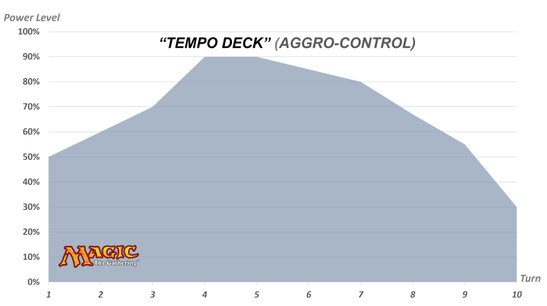 The “Tempo” (Aggro-Control) hybrid deck type is somewhat a blend and does have a more smoothed out profile.  It has a power curve that's different from the rest – it begins the game somewhere in the middle and gets stronger, but after some number of turns it normally tapers off again. 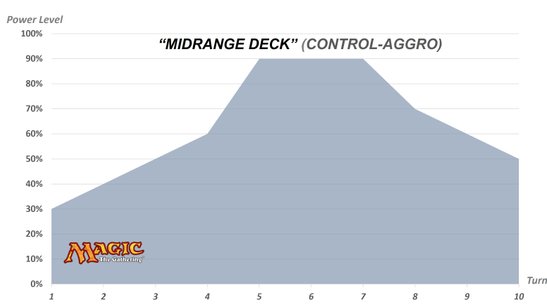 The “Midrange” (Control-Aggro) hybrid deck type is somewhat also a blend and does also have a more smoothed out profile. It begins the game building up then firing off a short series of potent threats, represented by a rising curve into a plateau.